Ted Marchie worked for Asphlund Tree Service in Chicago before moving to Missoula to attend college in 1948.

While attending school he worked for Montana Power on the line clearance crew.

In 1955, Ted and Vivian Marchie purchased property on 3rd Street to raise their family, Beverly, Kathleen, Richard, and Wayne. Here is where they built the house, Quonset hut and garage where the business is currently located.

All four of the children worked at the nursery at one point or another growing up. They all say that once they became adults they would work a couple days or whenever they were called and asked to work. Ted began traveling down to Arizona with cut Christmas trees and wreath to sell during the winter months.

Ted was a recent graduate from the University of Montana with a degree in Forestry and Business.

In 1956, Ted and Vivian started Montana Tree and Landscape Service. Vivian was responsible for running the business, along with keeping the books, answering the phone, and helping with customers. The business expanded between 1966 and 1969, adding trees, shrubs, firewood, and anything else that would help to make money or that a customer needed.

In the early 70’s Ted began traveling to Utah to purchase fencing, taking along one of the kids as a helper. Thus began the change to Marchie’s Nursery and Fencing. Ted and Vivian decided that they would drop Montana Tree and Landscape Service.
In 1972, Richard returned from the Navy to help at the nursery. He continued to work at the nursery until his death in 1979.

In 1974, Bill and Beverly Gutman became full time employees after receiving a call to ask if they would come back to help on occasion.

In 1980, Beverly became active with the Montana Nursery Association.

Beverly was on the board for 10 years. During her tenure, the board adopted the Certified Plant Professional program to the State of Montana. Beverly was in the first group to complete this program. Then Vivian began phasing out of the business with Tracie taking over more of her responsibilities.
In 1990, Wayne Marchie decided to open a Marchie’s Nursery and Landscaping in Butte, Montana. He continues to provide services such as pruning, spraying, and landscaping.

In 1991, Beverly purchased the business changing the name to Marchie’s Nursery.
In 1992, Beverly stopped going to Utah with cut Christmas tress and wreaths.
In 1998, Ted retired from the business to focus his attention on Golfing, fishing and traveling.

In 2002, Kathy Lockridge left the business to work full time at the University of Montana. Kathy has never really left as is true with any family business — occasionally she still helps out when needed.

Beverly is still the current owner of Marchie’s, with all three of her children — Tracie, Hollie, and Will — working at the nursery. Beverly is very proud of the family business and her family. We have worked very hard to carry on an honest and respectable business in this wonderful community. 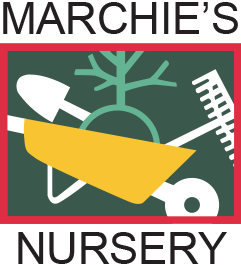